“Syrup on shit doesn’t make it a pancake” – Aaron Draplin

I wrote this post several days ago and meant to have it published Sunday. I spent 4 extra days thinking about what quote I wanted to start with – here I am Wednesday having made no progress. Later on, you will see I recently took liking to this man, Aaron Draplin – a quick google search lead me to this gem. In short, the quotes are merely the syrup on the pancakes of this blog. There’s a million ways I can interpret his meaning – versatility being a key feature of any vague idiom – but more importantly, it is endlessly fun to say. Try it for yourself next time you look to garnish to save a proverbial missing carb.

Since I posted two weeks ago I have made two significant purchases – including the single biggest purchase of my life. Firstly, along with wanting a new hobby, I have had an itch to learn a new skill. One that always appealed to me, and doubles as something I want to pursue for leisure, is graphic design/illustration. I have attempted time and time again over the course of my life to learn how to draw, or more broadly, create art, but have struggled in finding a medium that suits me. Charcoal drawing is frankly difficult – in the same light, do not get me started on pen drawing – and painting seemed both costly and messy. While not drawing per se, I took a class in ceramics, which, one day, when the sky falls and for some reason I can afford to rent out studios, I will return to. I loved every aspect of ceramics and still smile seeing pieces I made being used by friends for their morning coffee. If you are lucky enough to be my mother or father, then you got an entire box full of sometimes very large ceramic pieces that are now spread through every room in the house, even the bathrooms.

With ceramics on hold and a lingering inability to shade with a pencil, I figured now was as good a time as any to start paying for the Adobe Creative Cloud. The only nice thing about its price this far has been the pressure to use it every single day to make it seem worth the cost. Practice makes perfect and the constant reminder of the fact I really cannot afford another monthly cost weighs heavy on the days where I think “eh, not today.” I wish that same pressure brought me to the gym more often.

Adobe is fun – and that has been the biggest thing bringing me back to the different programs every day. Photoshop is where I imagined I would spend the most time but I have actually dedicated almost every minute to Adobe Illustrator. My understanding is that while photoshop is important to know, illustrator, a vector-editing/drawing program is the more essential tool for graphic designers. Illustrator is the industry standard for vector drawing and this means nearly every logo/infographic/web graphic made in the last decade or two was created first as a vector image in Adobe Illustrator. Without any projects that needed to get done I figured creating a brand for this blog would be a fun way to learn the platform. With some ideas in mind (really only one) I watched youtube video after youtube video to try and teach myself the skills necessary to make a good logo.

in. Both boring and not “logo-ish,” it was not long before I ditched this initial attempt and moved on. The defining feature however, quotation marks around my first initial, had potential. For a brief second I thought I might be onto something with the image below

But this too, was not it. By now I had got a hold of the concepts of shape building and turn vector text in shapes – but nothing was sticking and those skills weren’t helping me take the next step. What I attempted to learn next was building text out of shapes – my first attempt looking like this.

Again – I was a long way away from anything I would ever want to see on a t-shirt or pin. It was around this time when I first watched a youtube video about a man named Aaron Draplin. Not knowing it at first – Aaron Draplin is one of the most famous graphic designers in the world. He designed logos for patagonia, nike skateboarding, pretty much every snowboarding company in the world, and many others – including a logo for recovery.gov during the Obama Administration. Draplin is just a cool individual. He gets all of his ideas through “Junkin” as he calls it, visiting old junk stores, pawn shops, etc to find things from ages past that have logos which stood the test of time. He has made a career out of seeing things like moleskine notebooks and thinking “those look easy to make” and building 2000 notebooks by hand, eventually starting a company called fieldnotesbrand.com that has a cult-like following among graphic designers that, like Draplin, start all their projects with pencil and paper. Something he hopes for out of most of his logos, is that they will fit in if turned into a patch and thrown in with the rest of the patches he has collected over his life. This photo is a small part of his patch collection. 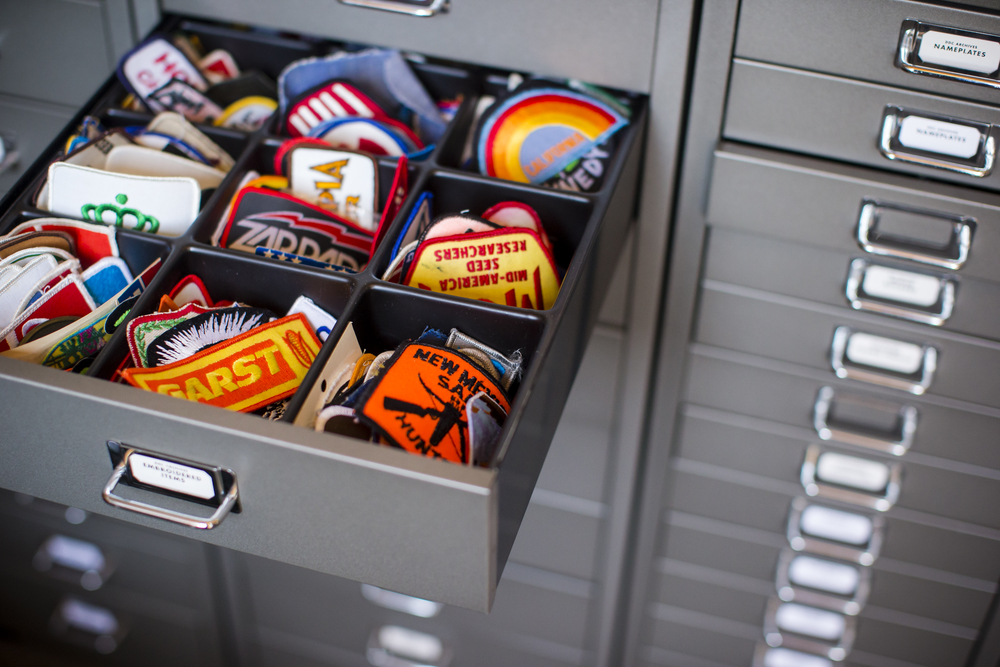 I loved the concept – patches are cool, and one day when this blog blows up I am going to need some merch of course. My logo took a turn here – I landed at a new design that I could have liked if I found the right color composition or if the outlines were thick enough or if it just overall looked better.

I liked the idea of it, but the execution was missing the photo here shows three different iterations of this stage in the logo’s development. I stayed on this one for several days actually – constantly trying different color combinations before I finally got sick of it to the point where I never wanted to see that logo again. I looks like something sold at beach side t-shirt cabanas or those bumper stickers that tell the world you have been to Hilton Head before. Is this fit of color-indecisiveness induced rage I blew the whole thing up and started from scratch, straying away from the typewriter font and onto something that pops more. The final product of this reimagining looked like this.

I LOVE the look of this one but it did not take long for me to realize that the look of a logo should somehow represent what the blog is and more importantly, what it feels like. While I think that would make a neat patch sewed onto a denim jacket – it doesn’t scream “20 something who started a blog to practice writing where he talks about things he read.” To get from here to where I wanted to be – I needed to return to youtube to learn the dreaded pen tool. The pen tool in illustrator has a reputation for being extremely useful when you get the hang of it – but at first glance, makes little sense at all. To youtube we go. The thinking I had was that I needed a cursive M to really add some style. The only problem being that I am so bad at cursive I had to go out and find someone elses that i liked. I sketched the cursive M I liked with the pen tool – added some flair to it, tried about a hundred different color combinations, and finally landed with this….

BOOM! Tell me that isn’t some A1 high-quality personal blog branding. I am not totally sold on the color scheme or the shape itself so plan on this continuing to change over the life of this blog. For now, I like it. My first adventure into Adobe Illustrator was an absolute blast – I learned a ton along the way and am excited to progress even further. One of my favorite aspects of the program is that all of this work is done on the same “artboard” so at the end of a project like this one – you have a living document with every single color combo and version of the logo in one place. My “artboard” for the logo looks like this

Do I want to eventually have a logo that was in no part helped by a google search of cursive M’s? Certainly. But what I ended with was quite a bit of work and is something I am excited to slap on the top of my blog.

The other significant purchase I made was for a trip to Japan in late June/early July. This one sort of fell into my lap as my friend’s brother accepted a law internship over there for 6 months. My friend told me he was visiting and after very little consideration I said, “uuhhhhhhhhhh…..can I come?” …here we are. It has yet to set in that I am actually going – I will surely document the adventure though, and plan to share some thoughts on this here blog, mostly for my own record. Words fall short in describing how excited I am to go.

I like quotes View all posts by Mark Nasca

One thought on “My Brand!”